New tea houses are being built on all around Manaslu trek route now; we are accommodating on tea house mode which used to be a fully camping few years back. This Manaslu trekking is also becoming the best alternative of classic Annapurna circuit.

Manaslu circuit trekking exhibits the glorious mountain views, fascinating culture and biological diversity. This trek suits best to those who are looking for the challenging but less trodden trekking in Nepal. This is also a part of the Great Himalayan trail. New tea houses are being built on all around Manaslu trek route now; we are accommodating on tea house mode which used to be a fully camping few years back. This Manaslu trekking is also becoming the best alternative of classic Annapurna circuit due to the road construction in the some sections of Annapurna region.

We start our Manaslu Circuit Trek from Arughat after the drive from Kathmandu. Trekking along the Budhi Gandaki river, the trail twists, scrambles and climbs its way along the confines of the valley. Much of the round Manaslu trekking is in the region known as Nupri, an area of strong Tibetan influence with the trade route between the regions. As we trek higher the Hindu culture is being replaces by Buddhist features of Mani walls, Khanyi gates and Chortens as does the topography changes.

Note: All accommodations are on twin-shared basis. Single supplement will be served on request and will cost an additional..

Note: Prices are in USD and exclude international flights. This trip price is based on low season rates for accommodation and other applicable services, and may change depending on availability, currency fluctuations and number of people traveling together. For high season prices, please contact us with your exact travel dates and preferences.

We will welcome you at Tribhuvan International Airport upon your arrival and transfer you to the hotel for the overnight stay. Our representative will be at airport to receive you please look for the placed card having your name.

Today after breakfast we start our tour to several of the most antique and spiritual attractions in Kathmandu listed as the UNESCO World Heritage (Pashupatinath, Swayambhunath, Boudhanath, Durbar Square landmarks). There will be a brief pre- trip group discussion followed by trek preparation during late afternoon at Travel Pinto Office in Thamel around noon. Overnight in Kathmandu.

We set off early today for Sotikhola. During the drive, we enjoy views of the Nepalese countryside along with the mountain sceneries. We will be driving on a paved road from Kathmandu to Dhading Bensi, but the drive from Dhanding Bensi to Arughat will be on a rough road. Upon reaching Arughat, a major town in the region, we drive further towards Sotikhola. Overnight in Soti Khola.

Trek from Sotikhola via Machha Khola to Khorlabeshi: 6 hours. Day 4

The winding path passes through forest, villages, streams, pretty waterfalls and green valley until we reach Lapu Besi a large village in this area. This is a village mainly inhabited by Mongolian inhabitants. Now we again sweep the zigzag path to reach Machha Khola and on to Khorlabeshi. Overnight in Khorlabeshi.

We begin todays trail by crossing the Machha Khola (Fish Stream) and head upstream to the small village of Khola Bensi and the hot springs at Tatopani, we can take a short bath at tatopani and then we follow the trail that is quite exposed and challenging in places. After a short section of forest path we reach the single teahouse at Doban. We move across the river on a suspension bridge, and then climb on a high path to the fields of Jagat, where we lodge for the night.

We begin today’s trek by climbing over a rocky mountain to Salleri, and then decline to Sirdibas. As trail continues up to Ghatta Khola, the valley widens. We further continue walking upstream to a long suspension bridge in Philim, a large Gurung village. We pass through bamboo forests to the Deng Khola. Upon crossing the Khola, we reach the tiny village of Deng. Overnight in Deng.

After a transcending beyond Deng, we cross the Budhi Gandaki and climb to Rana. From the bridge, we climb a bit to join a trail from Bhi. The trail also passes through forests and mani where we turn towards a corner that contours to Ghap. We reach Prok village which has a viewpoint for a beautiful sight of Siringi Himal. The trail follows the river upstream through a dense forest and leads us to Namrung. Overnight in Namrung.

We follow the right bank of the river, with views of Peak 29 ahead. As we continue on the main trail we soon reach the fields of Sama Gaon, 3500m. We camp at Sama Gompa, 20 minutes beyond the village near the Tibetan border, visit a very old Gumpa on the way to Birendra tal ( Birendra lake) created by Manaslu Glacier. Overnight in Sama Gaon.

We trek steadily uphill all the way to Samdo through a desert path and windy valley. The Tibetan border is just four kilometers away from Samdo. But visitors are not allowed to pass the border. This is an excellent view point for Mt. Manaslu, Samdo (Pang phuchuli), Nagdi chuli, Simnang Himal, Manaslu glacier, Manaslu ice fall and several other majestic peaks. Explore Samdo village and Stay overnight stay there

We take rest in Samdo as to get familiar with environmental condition (acclimatization). We hike, up the valley directly at the back of the Samdo village. This hike will take us to one of the trade passes to Tibet for majestic views of Mt. Manaslu, Simrang, Hiunchuli, Ngadi, Larkye Peak, Cheo along with.

Even today, we begin walking upward crossing wooden bridge over Budi Gandaki. Upon crossing two streams and viewing the Larkya Glacier we go around the valley of the Salka Khola and elevate up again to the stone guest house, which is also known as Larke Phedi (kind of shelter called Dharmshala). The short walk today also leaves plenty of time for acclimatization and relaxing in the afternoon. Overnight in Dharmashala.

After a short climb, we reach a valley on the north side of the Larkya Glaciers from where we can enjoy warm views of Cho Danda and Larkya Peak. From the pass, we find ourselves in front of Manaslu, Cheo Himal, Himlung Himal, Kangguru and the huge Annapurna II.Overnight in Bimthang.

From a ridge at Bimthang, we can enjoy glittering views of Mt. Manaslu, Lamjung Himal, Himlung Himal and Cheo Himal. We trek downhill further and cross a high pasture (Sangure Kharka) followed by a bridge over Dudh Khola. We walk through rhododendron forest before making a lofty climb over a ridge. We reach Tilije passing by through Gho Village. Overnight in Tilije Village.

We climb over a small hill and follow stone paved trail as it passes through a scenic village. We then cross the bridge over Dudh Khola and ascend up through a chorten-shaped arch, pass a mani wall and make upto the Thonje village. At the village, we go through a police checkpoint and continue to Dharapani. We have entered the Annapurna circuit section from Dharapani. We also come across some mani walls before reaching the village of Tal, situated at the foot of a large waterfall. Overnight in Tal.

We follow the trail to Chyamje village crossing the Marshyangdi River once again. The Marsyandi valley opens with its terrace fields and settlements clung very high to the hillsides. The trail leads us to Syange, descending through rhododendron and and pine forests to. Overnight in Syange.

The drive from Syange to Kathmandu via Besi Sahr sets opportunity to adore both hill and mountain landscapes. The drive is often along the banks of the Marsyangdi and Trishuli rivers. In Kathmandu, we will be escorted to our hotel. The day in Kathmandu can either be spent in leisure or perhaps we catch up with some last minute shopping. To celebrate the successful completion of our journey, we will have a farewell dinner in the evening. Overnight in Kathmandu.

Back to home or starting up new destination.

Write a review
There is no review 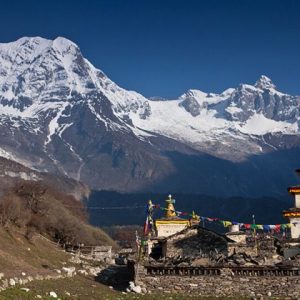 You are booking for Manaslu Circuit Trek