Laos At a Glance

Nestled between Thailand and Vietnam in the heart of Southeast Asia, Laos is an often overlooked oasis. From the stellar waterfalls and natural beauty of the north to the cultural icons and museums of the capital, Vientiane, Laos is jam-packed with incredible sights. A large number of visitors only ever make it to Vientiane on visa runs from Thailand, but the country has far more to offer than that. Some of the most beautiful scenery in the region lies in Laos, and it’s definitely worth the trip to explore it.

Currency: Laos Kip. The kip is worth roughly .00012 USD, so don’t panic if you see a sandwich that costs 25,000 kip. That’s normal!Electricity Socket: 230V AC electricity. Power outlets are two-prong round or flat sockets. A power adaptor should not be needed if you’re from North America or Europe as the outlets will accommodate both types of plugs. To avoid the hassle of having to buy new adapters for everywhere you go, we recommend picking up a Universal Travel Adaptor before you leave.

Visa: Getting a visa for Laos is super convenient. Just show up at the border, fill in a form, pay, wait, and receive a 30-day tourist visa on arrival. While certain countries in Africa and the Middle East must apply for visas beforehand, most others can just get visas on arrival. Citizens of ASEAN countries, Japan, Switzerland, Russia, and South Korea can get a free visa on arrival valid for 30 days.

The 30-day tourist visa costs between $30 and $42, depending on where you’re from. If you don’t have a passport sized photo with you, it will cost you $1-$2 extra. The visa on arrival process is pretty straightforward and usually doesn’t take more than 10 minutes.

Safety: Overall, Laos is a very safe place to visit. Personally, I’ve felt way more comfortable walking alone there than in most of the places I’ve lived in the US. But as with anywhere you go, it’s good to be cautious. The Lao people are generally friendly and kind, but you should still be smart. Don’t leave money out in your hotel room and keep an eye on your belongings when traveling, especially on a crowded bus. If you’re driving a motorbike, it’s good to keep it locked and parked in paid lots whenever possible to avoid theft.

In some parts of Laos, there are still unexploded ordinances left over from the Indochina War. While they’re mostly in rural areas, some can still be found near routes 7 and 13, so use caution when traveling in these areas. The roads are safe and there’s really nothing to worry about, but this probably isn’t the place to set off on that solo trek through the wilderness you’ve been thinking about.

Language: Lao, sometimes referred to as Laotian, is the official language of Laos. It’s closely related to Thai, so much so that if you speak Thai, you’ll be able to get by in Laos just fine. Luckily, many of the Lao people speak a bit of English, so even if you’re not fluent in Thai (like me) you’ll still be able to manage on your own while traveling there. Different dialects are spoken in the different regions of the country, but all are pretty similar. If you want to learn a few basics, here is our guide on Lao for travelers.Festivals and Celebrations: Holidays in Laos, like in much of the rest of Southeast Asia, are a blend of traditional and religious and festive and fun. One of the biggest celebrations is the Lao New Year, or Pi Mai Lao, which occurs in April. Much like Thailand’s Songkran, this festival spans three days and erupts into a nationwide water fight. You’ll definitely want to keep your valuables and electronics waterproofed before stepping out into the streets for this celebration.

In May, various villages will take part in Rocket Festivals. Traditionally done as a request for rain, small rockets are sent into the sky throughout this festive weekend. At the height of the country’s hot and dry season, this celebration also becomes a chance to cool down with some Lao beer and let loose a little!

Boun Awk Pansa falls in October and marks the end of the monks’ three-month fast during Buddhist Lent. Traditional offerings are made at temples in the morning, while the atmosphere turns to a party by the evening. Small boats of banana leaves are sent down the rivers adorned with candles and flowers for good luck.

Following Boun Awk Pansa is a boat racing festival. Races are held in many towns throughout the country, but perhaps the biggest and best is in Vientiane. The competitors practice for months beforehand and the entire city comes alive with excitement as they prepare for the races. It’s definitely an experience you won’t want to miss if you’ll be in Laos in October. 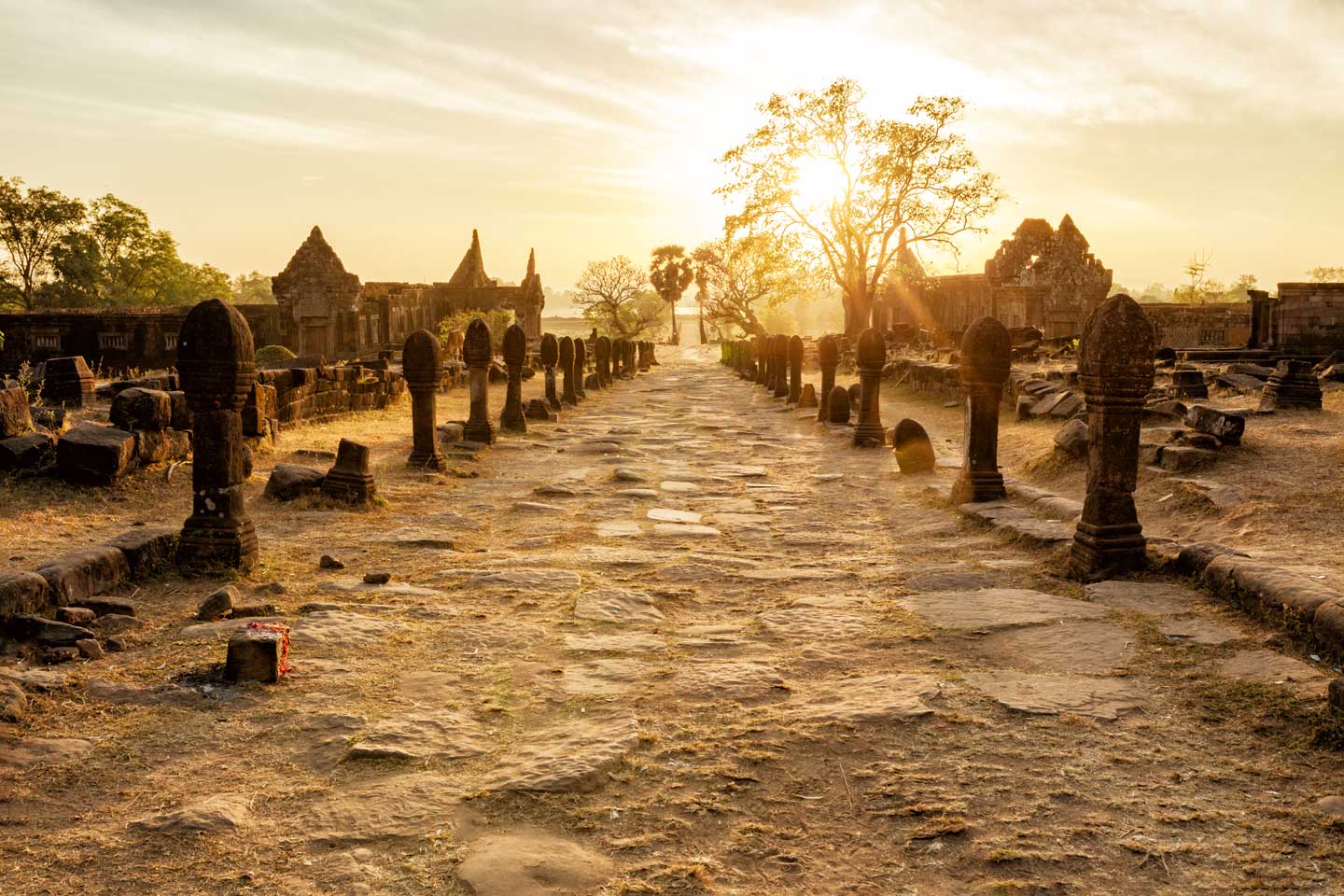 The most popular time to visit Laos is from November to January when the weather is the coolest. However, if you’ll be in the far north of the country, the temperatures during this time can get pretty cold in the evenings, sometimes dipping close to freezing.

Really, you can visit Laos any time of year. The only time I’d really avoid is March and April, when the height of the hot season culminates with the burning of the fields, creating air that is as smoky as it is humid. The cool season runs from October until February. March, April, and May are the warmest months, and from May to June the rainy season begins.

If you’ll be traveling from May-September, be sure to pack a rain jacket or bring a poncho. While it won’t be raining all day every day, it’s highly likely that you’ll at least experience afternoon showers during that time.

What to Pack for Traveling Laos

What to bring… It seems impossible to decide when you’re at home preparing for your trip. But honestly, you won’t need as much as you think you do. Bring clothing suitable for the hot and humid weather, but remember that Laos is a fairly conservative country, so you’re probably best leaving your Speedos and thong bikinis at home. Keep in mind, too, that if you’ll be visiting temples, you will have to have your arms and legs covered, so make sure you have pants or a skirt and something other than a tank top. 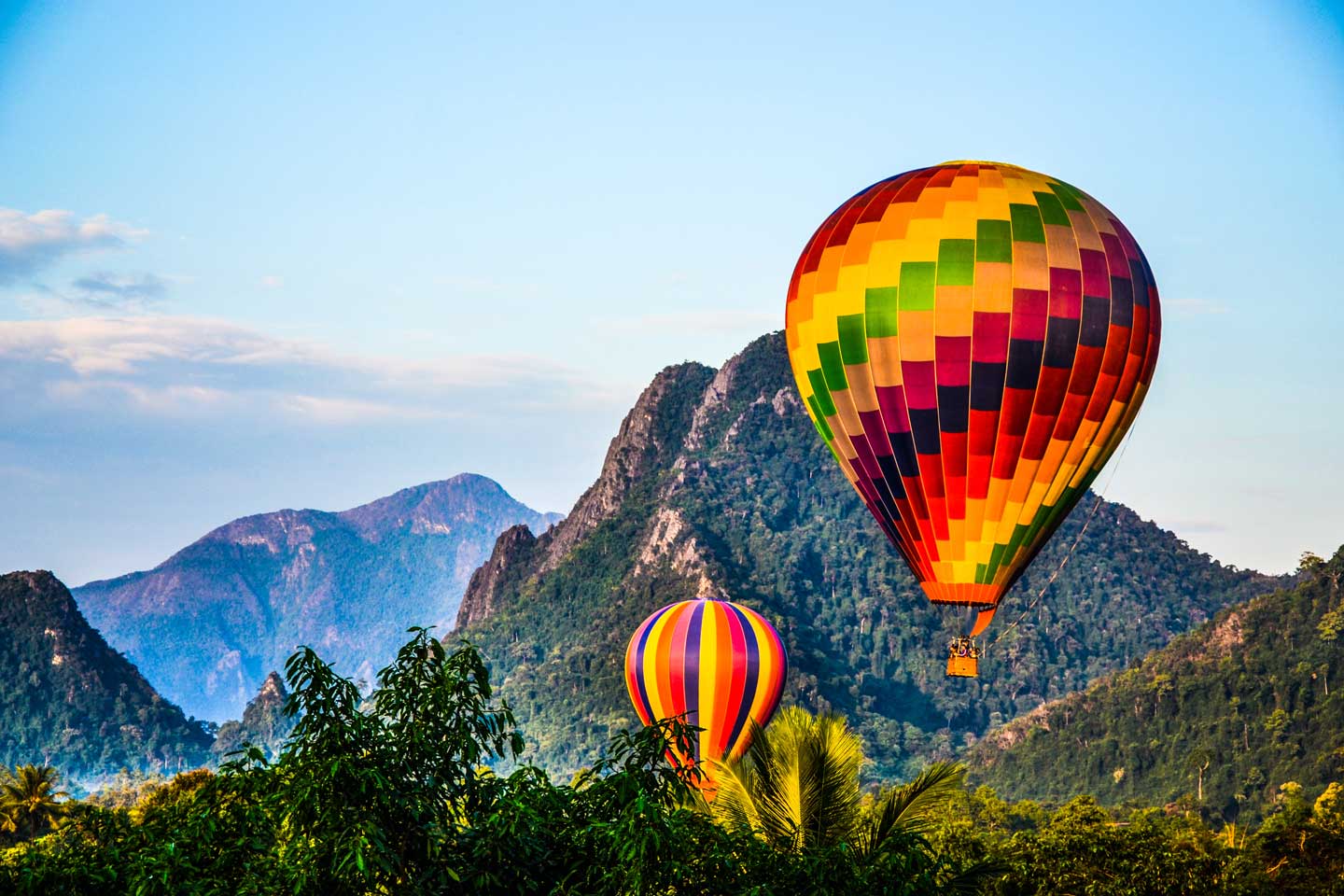 Best Things to Do in Laos

Experience the heart of Laotian culture in Luang Prabang

Luang Prabang, located in Northern Laos, was designated a UNESCO World Heritage Site in 1995. In addition to the architectural sites and impressive temples, there are so many things to do in Luang Prabang. Some people even argue that it’s the most beautiful spot in all of Southeast Asia, which is saying a lot! Hike to waterfalls like the Kuang Si (the biggest in the area), visit the underground caverns or take a trip to the Royal Palace Museum. There’s something for every type of adventurer in Luang Prabang.

Vang Vieng sits along the Nam Song river and is probably best known for being the best place for tubing. Rent a tube and enjoy the local scenery from the lazy comfort of a river inflatable. Thankfully, the tubing in Vang Vieng is no longer as crazy as it once was due to the many drunken river accidents. Nowadays, although the tubing is still one big party, it is also slowly rebranding itself as a top-notch adventure destination. While this might be what attracts the most visitors, there are plenty of other activities in Vang Vieng as well. Huge caves, crystal blue lagoons, and busy markets make it one of Laos’ most charming towns.

Visit the Buddha Park outside Vientiane

If you spend any time in neighboring countries like Thailand, you’ll quickly learn that Vientiane is the most commonly visited spot in Laos. There’s an easy explanation for that, and it’s not that it’s the most beautiful or exciting place. It’s because there’s a Thai consulate there, which is the place you need to go in order to pick a new visa. And there’s one huge complaint from tourists who have spent time there–it’s boring!

If you do find yourself in Vientiane, be sure to travel just outside the city to Buddha Park. Filled with statues and sculptures of the Buddha as well as of Hindu gods and demons, the park is a great place to spend a quiet afternoon. And when you’re in the city of Vientiane, be sure to check out all the temples and museums there too as there are a few interesting ones.

Explore the Plain of Jars

One of the country’s strangest landmarks, the Plain of Jars contains dozens of stone “jars” that date back thousands of years. Calling them jars seems like a bit of a stretch since they range from 3 to 10 feet tall and weigh around 14 tons each. While the site is becoming more accessible to visitors, it’s definitely not a place you want to wander around alone, since many of the surrounding areas contain unexploded ordinances, which you definitely don’t want to step on. If you’re up to the adventure, you can fly to Phonsavan and arrange travel to the sites from your guesthouse or hotel. Definitely, a unique spot to visit!

One of the most beautiful things about Laos is the fact that it is surrounded by so much nature. Our best advice is to get out there and see it all! From the waterfall studded Bolaven Plateau, the epic Thakhek Loop motorcycle trip, chilling out in the 4000 islands, all the way to seeing ancient temples and ruins near the Champasak Province there are heaps of things to do in Laos that involve the great outdoors. 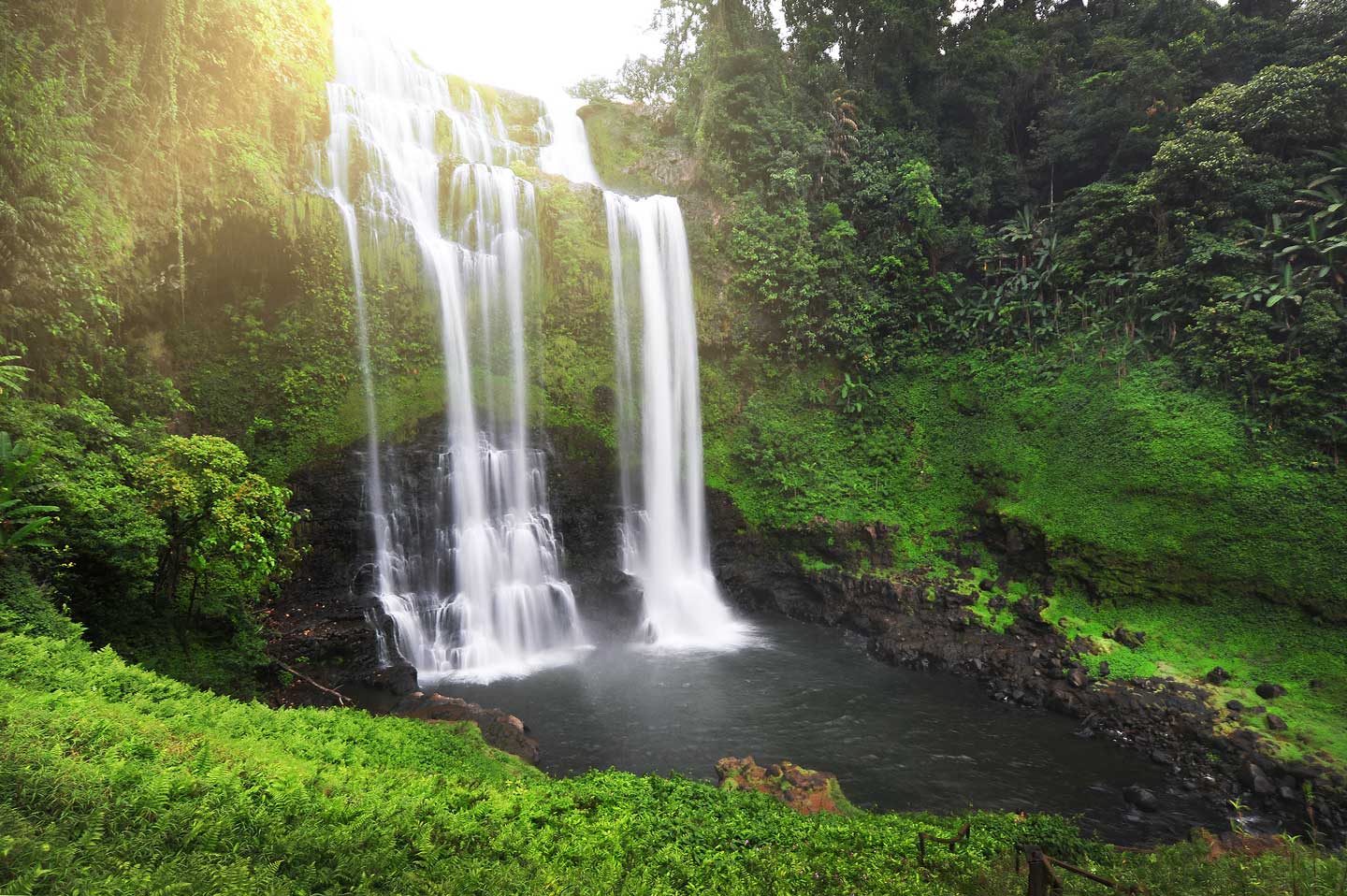 What to Eat in Laos

Lao food is closely related to Thai food, and they share many of the same traditional dishes.

Sticky rice (Khao Niaw): While rice is prevalent all over Asia, in Laos especially sticky rice is popular. Served at most meals, often in tiny woven baskets, it’s the perfect accompaniment to any dish.

Laab (minced meat salad): Cooked with lime juice, garlic, and other herbs, this meat “salad” can be made with almost any meat, including beef, pork, duck, and fish. This is one of the most well-known dishes in Laos and can be made with cooked meat, or raw (usually only the duck and fish are served raw). Different restaurants and street stalls with each have their own version of the dish, but wherever you go, it’s definitely worth a try.

Papaya Salad: This dish is made with shredded, unripe papaya, fish sauce, and a variety of meat and vegetable additions. Though originally a Lao dish, it was made more popular when it was imported in Thailand. The Lao version is a bit saltier and might be a more acquired taste to some travelers. Be careful if you don’t like spicy food because even this cold salad can pack a punch!

Mok Pa (Steamed fish in banana leaves): A perfect food to eat with sticky rice, this fish delicacy comes neatly packaged in a banana leaf tied up with a bamboo string. The fish is soaked in vibrant local flavors like lemongrass, kaffir lime, onions, and fish sauce and then cooked to perfection. 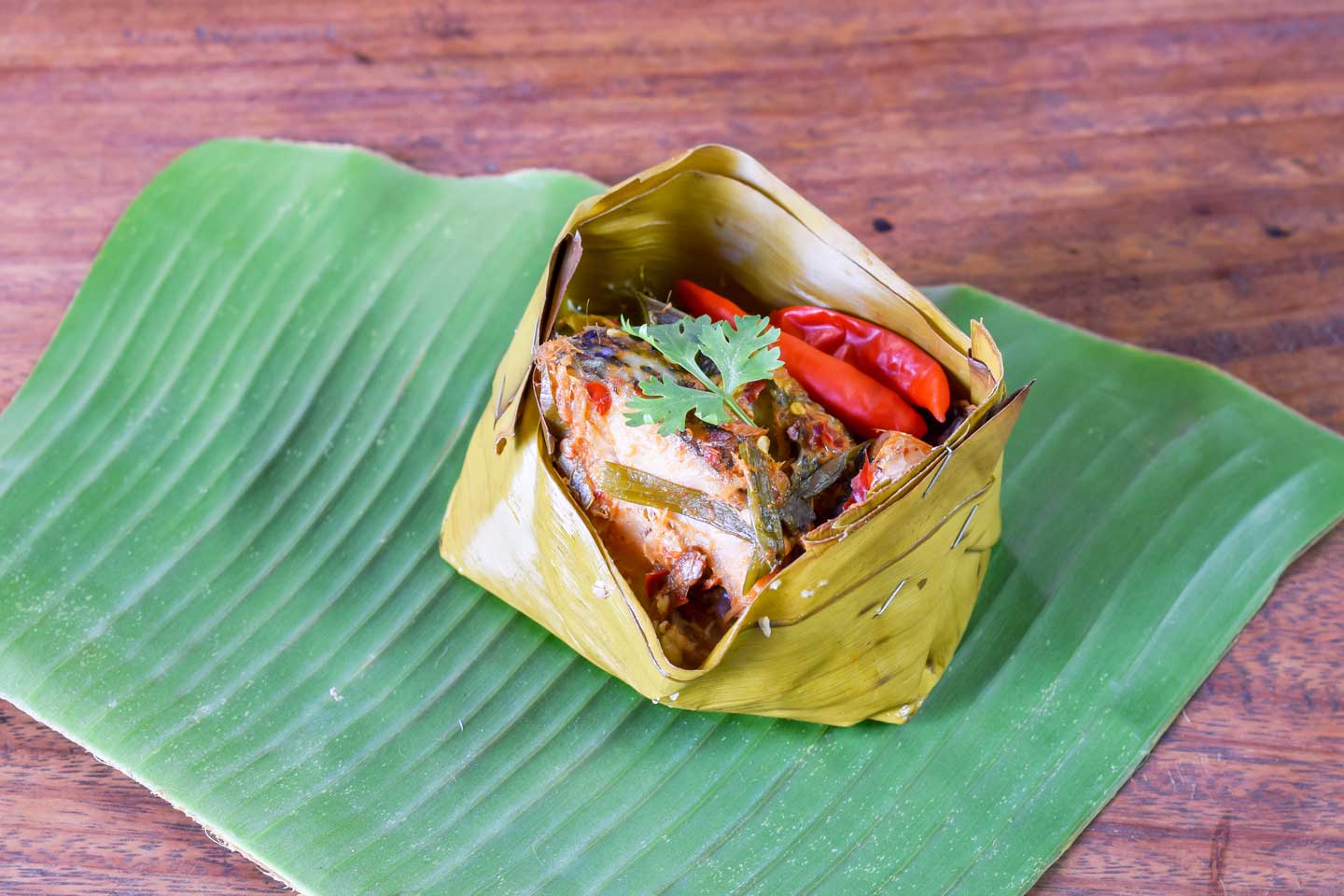